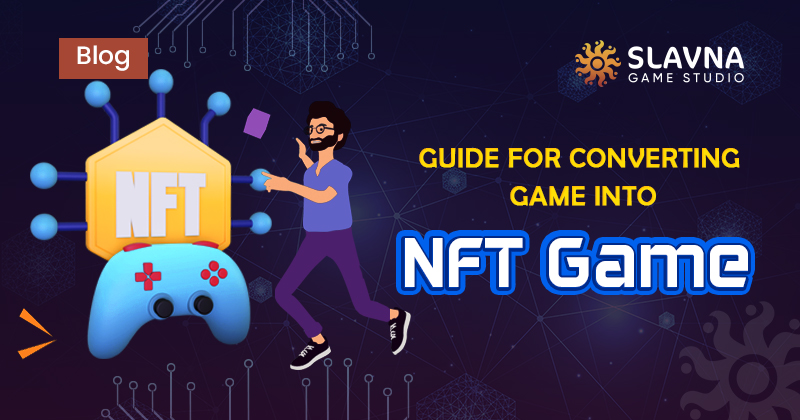 Ever wondered how the world of gaming and finance came together? It was all due to the unprecedented rise of the NFT marketplace and GameFi. The first NFTs were used in 2012, but Non-Fungible Tokens (NFTs) have become a hot trending topic since 2021, especially for artists, gamers and investors. In addition, play-to-earn NFT games offer a promising opportunity for players and game developers alike.

If you want to capitalize on the popularity of NFTs and work on your first NFT game development, here’s the ultimate guide to help you get start

What are NFT Games?

An NFT is a certificate or a confirmation of  purchase of a certificate that you own a digital file – an image, GIF, audio, video, asset, etc. For example, an NFT game is where players can buy and gain limited and unique gaming assets that are created on the Blockchain.

There’s a novelty factor for NFT games as not every player can earn the assets. For instance, if a game developer has created ten gold axes, only ten players can earn them, no matter how many players are involved. This makes NFT exclusive, and players love to sell or trade their assets.

NFTs have empowered the transition of gaming from free-to-play to a play-to-earn model, and the market is now evolving towards a more collaborative approach rather than a competitive one.

How to Create an NFT Game?

NFT games are highly beneficial for players, and thus, NFT gaming projects are in full swing. If you’re looking for NFT game development, some of the significant steps involved are:

Every NFT game project begins with preparation to ensure a flawless development process. During the pre-production stage, you start with choosing an expert NFT game development company with years of experience to join your team. Next, the team gathers relevant data with market and competitor research. These insights are beneficial to designing a unique NFT video game.

Then, the NFT game development experts define the concept and platform and choose the best tech stack for your game. A game design document (GDD) is also prepared to guide the team throughout the development process. Many experts also create a prototype demo version that helps visualize the NFT game’s structure and basic functionalities.

During this stage, NFT game developers work dedicatedly on the game to create an NFT game that players will genuinely love. They work on modeling and art design for 2D or 3D games, along with game level design for the logic or structure of the game. Mobile NFT games also require a crypto wallet, so developers will work on setting up the wallet and creating the smart contract – a Blockchain-based program for the NFT movement.

Once the game design is ready, they move on to coding and creating the structure of a decentralized game. The developers also make an application to get information about data, functions and commands from the game code and the Blockchain.

Since NFT games are a relatively new concept, a lot of testing is done to ensure the games are bug-free. There are three stages involved in QA testing that help fix bugs before the game goes on an NFT game platform. These include Unit Testing, Alpha Testing and Beta Testing. During the Alpha Testing, QA engineers undertake several functional and non-functional tests like regression, security access control, user acceptance, performance, compliance, stability, and more.

A closed beta testing by a limited number of people in the gaming industry helps developers get live feedback that can instantly rectify the game.

Finally, it’s time to deploy the mobile NFT game on app stores and promote it extensively for maximum reach. By joining popular NFT communities, creating a buzz on digital platforms and having a substantial marketing budget, your NFT game can reach more gamers and players and help you earn the best ROI.

It’s also a great idea to offer deals for new users in the first month of deployment, as deals and discounts help you get more players on your NFT gaming platform.

Adding NFTs to your existing game

The world of NFT is growing at lightning speed. If you don’t want to develop a new game but add the tokens to your existing games, highly experienced developers can help you convert a traditional game into an NFT game. They do this while keeping the game balanced, maintaining the structure and functionality and ensuring an optimal size-to-quality ratio.

You can choose NFT for gaming for any of your existing games and enter the world of NFTs and high profits.
Ready to build an iconic game based on NFT technologies? Slavna Game Studio is a leading NFT game development company with 13+ years of experience designing and developing online and mobile games. Our expertise in NFT game development can support your journey of building the very first NFT game.

Found this guide to NFT helpful? Contact us for a quote today.

Utilize our expertise in NFT Game creation to update your current platform, allowing you to make the most out of your significant marketing expenditure.